This year, like almost every other, by the end of summer I found myself in possession of enormous amounts of various kinds of home-made honey of ridiculous quality. Previously I’ve been using the spoils for cooking and bartending, but this year I’ve decided to go all out and make my first mead out of it.

This is the first part of my sugar’s journey into becoming booze. My name is Maciej, and I’m here tell its (ridiculously unkempt and hastily written down) story. 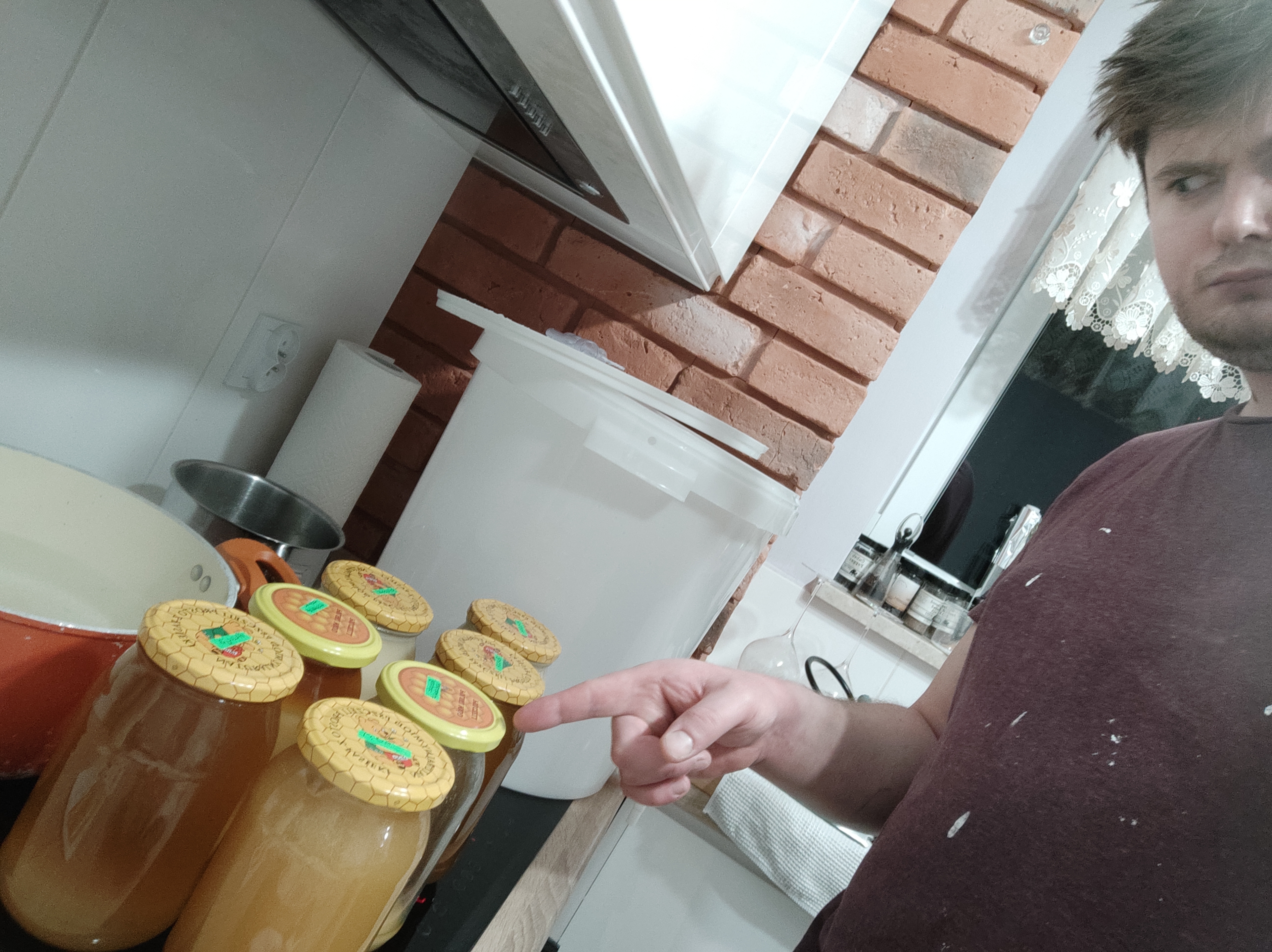 I wanted my first mead to be to, well, the Bee’s Knees of meads - easy to drink, pleasant, and balanced off the dry side. I did not yet settle on whether I wanted it to be sparkling or not, but that could be decided once I was done with the first fermentation. One thing I was sure of - it was to be a clean expression of the honeys involved, with no added spices or fruits.

You can always add things, but never take them away. This is the approach I use in everyday cooking, especially with spices and other fragrant tastes.

Before I begun fermenting, I researched.

First thing I realized, and something you need to know about the brewing world, there’s lots of fairly industry-specific wording - jargon, if you will. I came to understand it, because I had to, but I find it wholly unnecessary and I don’t intend to use any of it in this post. Neither will you find more mentions of gallons or pounds. I like actual units of measurement.

The first step in the process of turning sugar into alcohol is diluting the sugar to a level digestable by yeast. This is most usually done with water (but also fruit and vegetable juices, teas, etc. if you want to get fancy), and results in what looks and tastes like a weak syrup.

Yeast is then added, and begins the transformation we’re all after.

The sweeter the syrup, the higher the final alcohol content and past a certain point, sugar level. Although the exact science escapes me, I think it has something to do with yeast’s inability to function in environments over certain alcohol levels, and thus starting to leave some unfermented residual sugars behind, once it enters that stage.

I opted to keep the honey-water ratio low, to enjoy a drier mead. It just gave me more options to work with. In the unlikely scenario where my mead would come out too dry, I opted to add sugar again, after the fermentation reads as complete for the first time. Yeast, unlike chemical agents, can and will reproduce in its medium, thus making such actions not only possible, but common place amongst brewers.

The mead-making community has developed a mead calculator which I found incredibly useful for determining the exact numbers here. A lot of the brewing math is based around the concept of specific gravity, which is a liquid density measurement. When added to water, sugar increases the density of the resulting solution. Again, I won’t pretend to know the chemistry and math behind it. According to various resources I pieced together, dry meads usually start out about ~1.07 - 1.11 SG and come out at ~10 - 15 % ABV and near 1.0 SG (meaning the yeast ate all of the present sugar).

And so, the initial ratio I picked was 5 liters of honey and 16 liters of water. According to the calculator, this would result in starting gravity of 1.103 SG, and ferment to 13.54 % ABV.

Sadly, the Polish market is not ripe with internationally relatable yeasts, and, frankly, I did not care about the strain of microorganisms involved, as long as they could process sugars into ethanol under a reasonable temperature range. I’ve acquired a well-reviewed mead yeast called “Enovini”. Poland has a long tradition of making mead, so I could be reasonably sure of its ability to do its job.

And so much of it.

I’ve sanitized all (down to the ladle I’ve used) of the equipment with potassium metabisulfite, or, if you want to flex your tongue, pirosiarczan potasu.

Here’s where things get a little anti-climactic. This step was extremely uneventful. 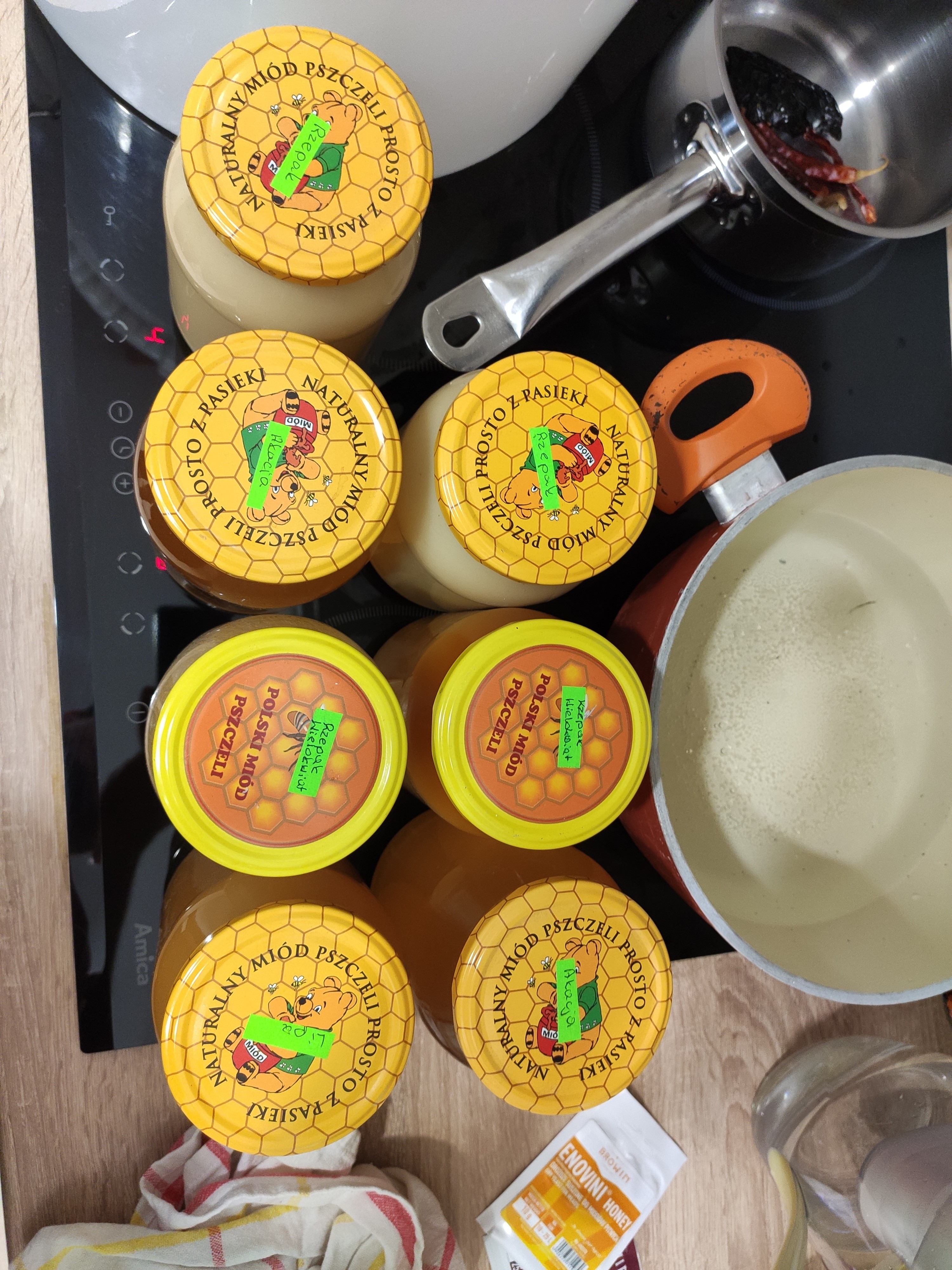 and water, and brought it up to a temperature where I could mix the two. Then I’ve poured the mixture into the fermentation vessel, and let it cool outside. 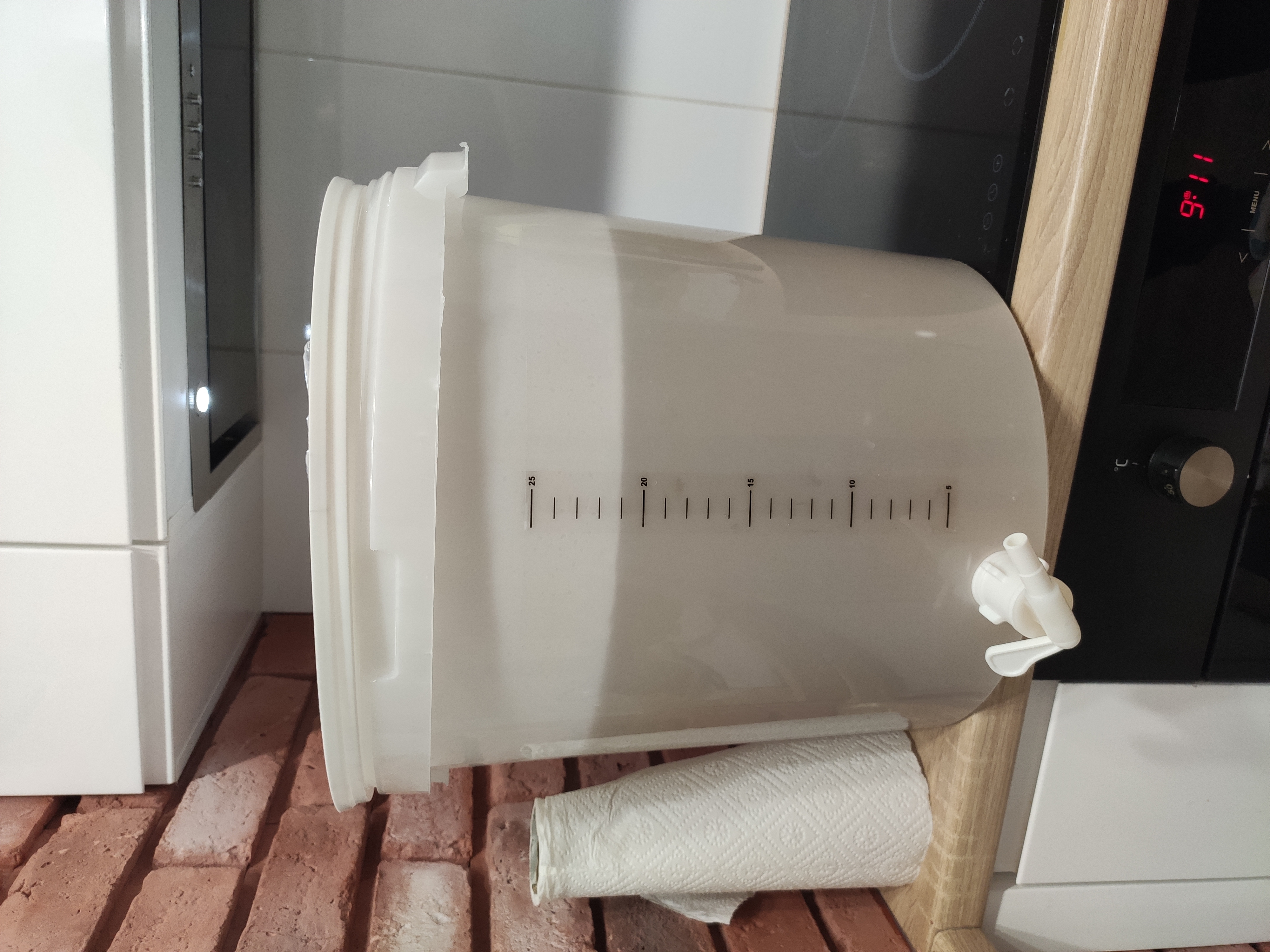 I’ve then measured the aforementioned specific gravity with a hydrometer. It came right about 1.11 SG, meaning the potential alcohol content of the final product would come in at around 14.37 %, which was right in my desired range.

This also nearly matched the calculations I’ve made earlier using the aforementioned mead calculator, and so I added the yeast, installed an airlock filled with cheap vodka and fucked off for the night.

I’ve later realised I’ve stripped my honey of parts of its flavor by bringing the temperature up so much. For my next mead, I intend to do no heating of honey at all. While this means more natural yeasts will be present, that’s not exactly a problem for me. Firstly, they can participate, if they desire, secondly, spontaneous fermentation wines would like to have a word.

I’m lucky enough to have an alternative on hand for the actual mixing - a high-powered blender. It accomplishes two concerns at once - mixing and aerating (apparently required for yeast reproduction; again, the actual science escapes me here).

The next morning I freaked out a little. The airlock activity was non-existant. Sure, it seemed like CO2 appeared to put some pressure on the water, there was no vigorous bubbling. I took to seek advice of more experienced brewers. They were firmly of the opinion that I should wait until (at least) the 3rd day of fermentation before messing with the brew.

And so I did, and freaked out even more, because from the outside it’d seemed like nothing was reproducing inside my lily white bucket. I then began googling, and lo and behold, it turned out buckets leaking CO2 without going through the airlock was fairly common. While I heavily dislike leaks of any kind, this was fine in theory, as the CO2 still formed a protective layer on top of the beverage.

And so, since the airlock wasn’t telling me a thing, it was time to begin monitoring the actual fermentation progress using the same tool I’ve used to take the initial sugar content measurement - the hydrometer.

Imagine my surprise when the yeast was not only happily farting out alcohol, it was doing so at a speed I did not expect. Within 5 days since the fermentation begun, specific gravity was down to 1.07, meaning the sugar was ~35 % eaten.

Now, nearly 3 weeks after the start date, the fermentation is nearly complete with 1.005 SG.

Of course, I couldn’t help but take a sip every time I took these measurements. The brew was getting better, less sweet and more alcoholic with every try, but I could tell it had a long journey ahead of it.

All that’s left here is to wait until the yeast finishes eating. The next part of this mead’s adventure will be transferring the mead to an aging vessel it in order to age it.

How long until that happens? It’s gonna be soon, but I really have no clue. I’ll be sure to post about it, tho.